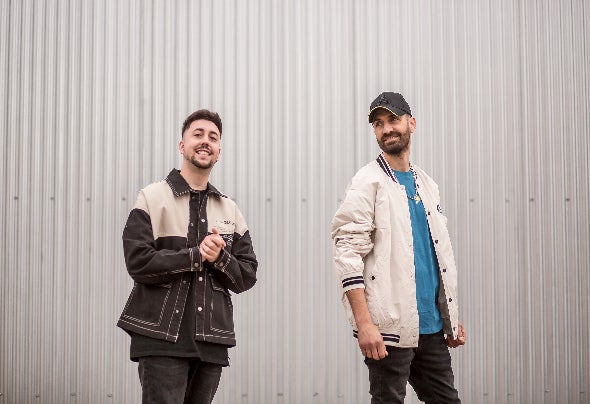 Disaia, the Spanish DJs and Producers of Extremadura origin who in a short time went from touring the European continent, to debut on the American continent. You will probably see them enjoy the best festival in Spain, such as sailing the Adriatic Sea and the Croatian coasts aboard a boat, playing in a club in Ibiza passing through beautiful Italy, even crossing the Atlantic Ocean, just to mention some of them. If something stands out in these two guys, it is their freshness in their Tech House sessions, thus highlighting their own work and productions, mixing a good musical selection, the connection of the public and the good vibe of the environment. But don't be surprised if one day you see them playing House at the best afternoon party or get excited with mythical and eighties songs on top of a Castle. International artists are already a benchmark in electronic music, having been signed to prestigious labels such as "Hot Creations" by Jamie Jones and Lee Foss, "Moon Harbour" by Mathias Tazman, "Sweat It Out" by Yolanda Be Cool, "Sola" by the duo Solardo, "Kneaded Pains" by Dense & Pica or "Roush Label" by Hector Couto and a wide range of leading and respected labels such as Cr2, Snatch! Records or Glasgow Underground. BBC radio 1, Kiss FM, Defected Radio and Ibiza Global Radio, are just some of the many radio stations where they play their songs and make their little cameos to greet you and start a nice day. Tomorrowland, BPM, or Ultra de Miami to name a few, are the great stages where they have played their songs by artists such as David Guetta, Black Coffee, Joel Corry, Martin Garrix, Martin Solveig, Kungs, Nicole Moudaber, Pete Tong or Gorgon City. Victor and Jesús, the people behind Disaia, are two friends born in a small town in Badajoz. Since childhood they have shown a great interest and passion for music. Although they started playing commercial music, They were always fans of house music, vocals and electronic rhythms. When they discovered their common passion, they decided to come together as "Disaia" to produce a different "Tech House" that would stand out and become the sound of a new reach within this genre. Learning to produce with different types of programs and inquiring in a self-taught way about this world they began to get more involved, leaving everything aside to dedicate themselves solely to production. Such was the effort that in just a year and a half they began to reap its fruits, thus entering the TOP 100 of Beatport and receiving the support of the greatest and most recognized artists of electronic music. Playing in places that cannot be pronounced and in places that they never dreamed of, Disaia have earned a place in the Underground scene.