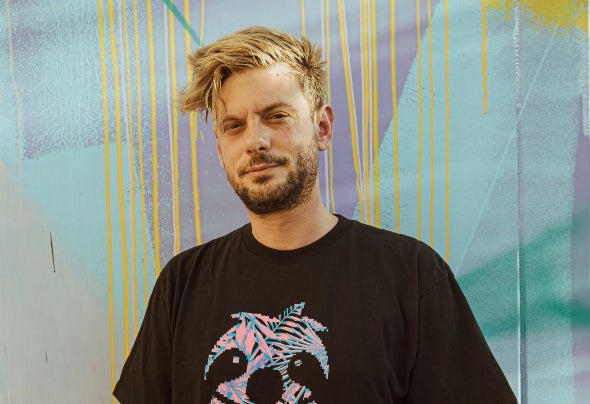 Having an in-depth knowledge of airports might be enough to get you labelled as an international DJ these days, but describing the German-Italian Sacha Robotti, who was born and raised in Belgium, educated in the UK and Germany and now resides in the US after a significant stint in Berlin, as ‘international’ doesn’t really do him justice. Experience is arguably the sum of a person and for Sacha Robotti, his story began in classical music, playing the cello aged 7. Growing up in Brussels, he didn’t resist the lure of its thriving underground house and techno scene for long and a steady diet of electronic music provided by touring legends like Green Velvet, Jeff Mills and Dave Clarke helped sow the seeds for the Slothacid empire he’s now building. Sacha’s professional music career began in Berlin around 2005 where his time as one half of Robosonic helped build his profile as a respected producer, DJ and label owner. However, it was in 2010 when the solo sounds of Sacha Robotti really started to take shape with his debut track “Tingly Trumpets”. Fast forward a full decade and Sacha Robotti is now something of a household name in certain dance music circles - if not by name directly, then almost certainly known for the Sloth motif which has come to represent his Slothacid brand across merch, sell-out tours and most recently as an independent record label and platform by which Sacha supports up-and-coming talent. But we’re getting ahead of ourselves because ten years is a long time and you’re probably wondering what happened during that period, right? Well, to cut a long story short - it included releases on Klasse, FOOD, Snatch!, Octopus Recordings, Sweat It Out, Desert Hearts, a Beatport #1 on Suara, and of course Dirtybird where he has become a longstanding member of the family with multiple EPs, collabs and a VIP joint with Claude vonStroke himself. This ten-year journey saw Sacha’s sound evolve for sure, but the fusion of techno, house and booty-shaking basslines has remained consistent throughout and explains why Sacha counts the likes of Seth Troxler, Dubfire, Chris Lake, Ellen Allien & Nicole Moudaber as supporters of his music - an output that has put him on prestigious lineups at events like Coachella, CRSSD Festival, Electric Forest, EDC, Nocturnal Wonderland and many more. With the timeline almost complete, let’s slow things down to take a closer look at 2019 - the year that marked a change in pace for the Slothacid brand and perhaps the year that cemented the direction Sacha’s career will take over the next decade. Summer 2019 saw Sacha Robotti launch the Slothacid record label - a launch which was supported by Billboard, no less, as well as a largely sold-out 30-date open-to-close concept tour of North America and Canada. It was a statement of intent for Robotti, and one which has since seen him expand the vision of Slothacid as a platform for not only his own productions, but also as a way to support the talent around him with two releases per month and an eclectic sound that takes in club culture, acid, techno, electro and everything in-between. As 2020 draws to a close, Slothacid has laid solid foundations with boundary and genre pushing releases, including a collaborative EP by the entire Saunderson family - brothers Dantiez and Damarii, along with their parents Ann and Kevin - Detroit’s very own techno royalty whose ‘Signature Move’ package caught the attention of Billboard, Forbes, BBC Radio 1 and more. For Sacha, it’s his collab with techno mainstay, SIAN on his Octopus label and promises of joints with Kevin Knapp, Mikey Lion, Dantiez Saunderson and more that sets things up perfectly for 2021 and ensures 2020 is remembered as a career-defining step rather than a socially distanced memory for this particular Sloth.